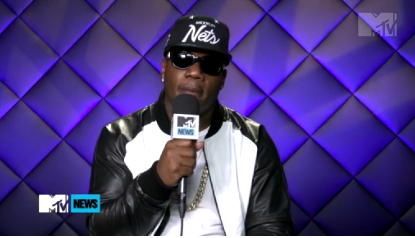 Songwriter Sean Garrett,who of course co-wrote and produced Gwen’s song “Now That You Got It” from The Sweet Escape album and who also worked on Miley Cyrus’s new album,recently told MTV News that Gwen was among the female singers considered to be featured on Miley’s song,”SMS (Bangerz)”. Garrett says that Gwen’s name was the first to be ”tossed around” since she has an ”edge”;Nicki Minaj was apparently considered for the track as well,but ultimately Britney Spears teamed with Miley for the song. The MTV article states that Garrett wouldn’t commit to the idea of a “SMS” remix featuring Miley, Britney, Gwen and Nicki,but rather ”just laughed and subtly championed the idea. “Yeah, yeah,” he said with a wide smile.” Miley of course was pictured in a studio with Gwen,Tony,Pharrell and Sia earlier this year,but Tom stated that No Doubt just happened to keep running into Miley at the studio.

When Miley Cyrus decided to collaborate with Britney Spears on her Bangerz album, the goal was bigger than merely pairing the new pop-queen with her idol. But as songwriter Sean Garrett tells MTV News, they had a few more ladies in mind for “SMS (Bangerz)”.

“SMS” stands for “strutting my stuff,” and on the 1980s hip-hop-inspired track, Miley and Britney do just that. Although singers like Gwen Stefani and Nicki Minaj didn’t make it to the track, maybe a remix is on the way.

“The first name that we tossed around was Gwen Sefani. We were talking about Gwen because you know Gwen got that edge too, but that’s how God works. We were throwing around those ideas,” Garrett said on Wednesday (October 9) about the song he helped pen with Mike Will Made It. “Nicki, we were talking about putting Nicki on there too. That would’ve been nuts too, but I think that’s how God works, this was absolutely the right one.”

Still, Garrett wouldn’t all the way commit to the idea of a “SMS” remix featuring Miley, Britney, Gwen and Nicki. Instead, he just laughed and subtly championed the idea. “Yeah, yeah,” he said with a wide smile.