Save Ferris Facebook page, just announced they will be the opening act for both dates. They will perform as the opening act for Young The Giant. Save Ferris being added to the bill makes the whole thing more special, they are an OC ska band with a female singer. Their version “Come On Eileen” made an impact on radio and the band rode the wave from No Doub’ts sucess and the revival of Ska in the 90’s. 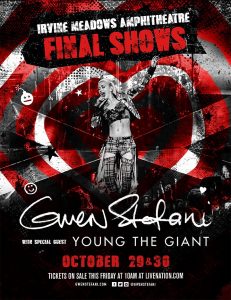 Gwen called KIIS FM to chat with Ryan Seacrest and talked how it was going back to touring this past months and how it was a crazy and so emotional to share her story with her fans. She confirms that will be playing Irvine on October 29 and 30th and how devastating it’s for her to be the final show for the venue. Ryan comments it’s only fitting that she’s the closing artist for Irvine Meadows due to her history.  Gwen talks the first time playing there opening for Ziggy Marley (in 1990) and thinking “How on God’s great earth are we playing here?” and how many great memories she has of all the times No Doubt and herself performed at Irvine Meadows and how honored she feels to be their closing act. Ryan asks if she can bring No Doubt to play with her and she says it’s been a crazy year so “You never know”. Tickets go on sale on September 16th.
Ryan mentions a interview with her from earlier this year, before her relationship with Blake was so public and asked her if she had pictured things being they way they are now and responds that she is now more awake  and now that her tour is ending and school is starting she is depressed cause this year has been so full of joy, meeting all these people on the show and getting to know her fans and their stories and how that has helped her and made he feel so blessed in her career.
She also mentions the bullied boy she brought to stage and how he has touched he and her boys and how that was she wanted her music to do, to touch people’s heart. At the end Ryan asked if she would consider remarrying someday and she kinda dodged the question.

Gwen will be joined by Young The Giant as a special guest for both dates. Both shows go on sale Friday, September 16, at LiveNation.com VIP Packages start selling at Tuesday, September 13, at 10am PDT.

Yesterday rumor on Twitter was that it was announced on both 97.1 AMP Radio and 102.7 KIIS FM that today at 8am Gwen would be calling in or making popping in at their studios to make a big annoucement. We had posted those rumors on Facebook last night and this morning, KIIS FM has took to Twitter to confirm that Gwen will be calling in their studios at 8am for her annoucement. Many are speculating to what could be.  She was at the set of The Voice on her Snapchat account this week as we also reported on Facebook, but many believe she could annoucing her Irvine date, that was already reported by us. We are already on duty and will be reporting the new as soon as they are in. Stay tuned!!!

Happy Friday! We have @gwenstefani calling in after 8am with a big announcement! https://t.co/ZLHt5xDJ5D pic.twitter.com/NEEFR4x3VG