Elle UK has revealed that Gwen will be the cover star of October’s issue! She’s looking gorgeous, as always 🙂 The cover says: “Gwen Stefani – Style Icon Mother & Wife – Inside Her World”. Photo by Matt Irwin.

Who doesn’t love Gwen Stefani, really? Katie Mulloy interviews her for the October 2012 issue of ELLE and describes her as ‘our girl-crush long before the phrase existed, being, in those mid-1990s years, all that a teenage girl wanted to be.’ Sixteen years after the release of No Doubt’s first hit, ‘Don’t Speak’, we’re still smitten.

In the interview, Gwen admits to finding motherhood difficult, saying that ‘being a mom is hard’, and that ‘Push and Shove’ – No Doubt’s sixth album – was about ‘being overwhelmed and the balancing and trying to do all of it.’

Get ready for a proper swoon-fest as, also in this issue, Aaron Taylor-Johnson talks about his ambition to ‘be a father and make a happy home.’

ELLE’s fashion insiders expound on the season’s gothic trend, how to wear leather trousers, debate the merits of hi-top versus low trainers, and deliver a master class on how to wear ankle socks. Meanwhile, Avril Mair meets Guillaume Henry, designer of label-of-the-moment Carven.

And, impressively, this issue was put together by the talented winners of our Edited by the Interns competition.
The issue will hit newsstands next Wednesday September 5. 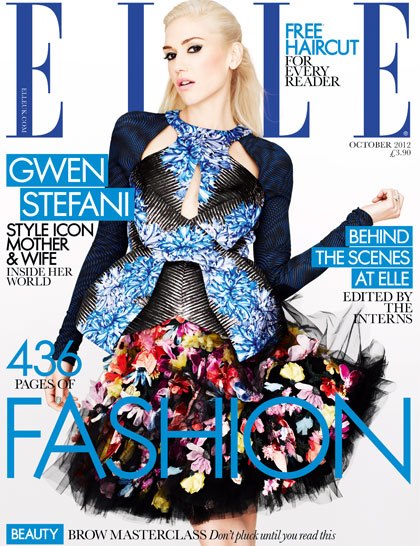