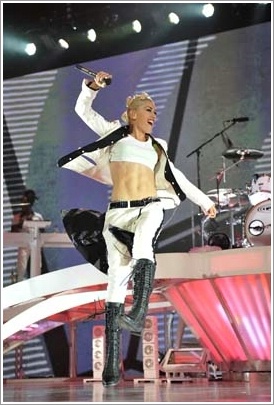 Yay,Gwen has much-deservingly been named one of Fitness Magazine’s Top 20 Fitness Icons for her rock-hard abs!

Before Gwen Stefani began strutting her stuff as the superfly front woman for the otherwise all-guy band No Doubt in 1995, the role of female lead singer tended more toward being a sexpot than having a six-pack. The blond bombshell, now 42, brought a new athleticism to the stage with a bod she credits to “lifting weights [and] a little boxing.”