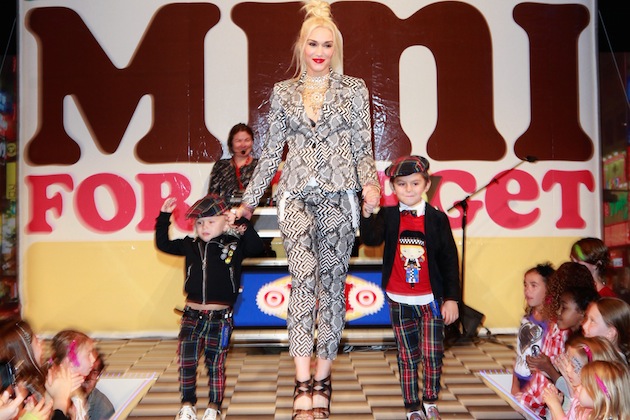 Gwen is much-deservingly featured in Yahoo’s article on female artists who balance music with motherhood.

To some kids, mom isn’t just a rock star, she’s so much more! After celebrating Mother’s Day, let’s give some rocking mamas applause for juggling a busy career with being a loving mom and making it look cool, glamorous and effortless!

Gwen Stefani has been rocking her stellar voice and glam looks since she formed the ska band, No Doubt, in 1986 and released their first album several years later. The California girl has been married to fellow musician, Bush singer Gavin Rossdale since 2002. Now expanding her talents to include fashion designing, the busy mom keeps her family connected by taking her brood on tour with her.

She says she likes to be with them “whenever she can, of course.” She cites her own mother as an influence for being a hands-on parent. Her children, sons Kingston, six, and Zuma, four, are adorable boys that take after their parents in the looks department. Clearly the boys have lots of creativity in their genes as well! Stefani and her band, No Doubt, are set to release a new album in September of 2012 and you can grab her adorable clothing line for girls, Harajuku Mini, at Target.