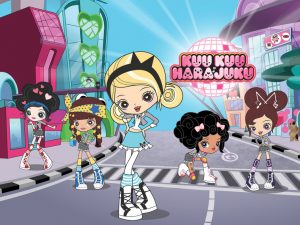 Gwen is continuing to make headlines as she continues to promote her new Nickelodeon cartoon, Kuu Kuu Harajuku, she has sit down for a chat with Billboard about her new project. She also talks about the possibility of No Doubt reuniting in the future, and sadly her response to that question  will disappoint fans, she confirms what Tom has been saying on Twitter, that there no plans in the future for a reunion.

Check out the full article below…

With latest album This Is What the Truth Feels Like and her most recent stint as a coach on NBC’s The Voice behind her, what’s next for Gwen Stefani? For her next move, the superstar has the new animated TV series Kuu Kuu Harajuku, which she produced, debuting Oct. 3 on Nickelodeon.

Even though it isn’t another musical endeavor for Stefani, she has a closer tie to animation than some may know. “My brother, Eric Stefani, who was actually in No Doubt for nine years, has done animation for years. He worked on The Simpsons and Ren & Stimpy,” Stefani tells Billboard.

Stefani says this project is unlike any other children’s animated series on TV. Taking from the concept of her first solo studio album, 2004’s Love. Angel. Music. Baby., Stefani resurrects the Harajuku Girls that accompanied her through her metamorphosis into a solo star. Very much like the Harajuku Girls in Stefani’s entourage, the characters on the show bring their own flavor to the series. “Each girl in the show has their own personality and their own strength. I think that’s what’s fun about the show is that there’s no boundaries and anything can happen.”

Even though she’s a major music icon, the show does not include Stefani’s songs from her last three solo studio albums. Not having her music in the show “was the hardest part” for Stefani. “I really wanted it to be reflective of me, but I was also OK with it being broader than that.” Unlike her latest album, which was a “spiritual awakening” and very much a therapeutic tool for the singer, everything about this show is for the kids. “Since it’s for children, that’s what’s cool about it, because I don’t have to be in my musical world. I still get to do everything I love but just in a different format.”

Kuu Kuu Harajuku does, however, include Stefani’s unique cheer-type chant as heard on the Billboard Hot 100 No. 1 hit “Hollaback Girl.” “The music is very similar to the music on my first two records. It’s a cross between an ’80s video game and pop music. … The theme song is super catchy and the writers even took lyrics from my songs to incorporate into it. That part is like a kids version of me.”

Since Stefani is reviving the Harajuku element of her past career, will the no No Doubt frontwoman also reunite her band for a follow-up to their 2012 comeback album Push and Shove? Stefani pondered that thought for a moment and said, “We haven’t talked about that actually. Everyone is doing their own thing right now.” The thought of a No Doubt reunion seemed like something that will not be coming anytime soon, since “it feels like family time,” said Stefani.

Looks like we will have to keep waiting for that No Doubt reunion, but for now, kids can take in the world of Kuu Kuu Harajuku on TV.

1 thought on “Gwen discuss No Doubt reunion with Billboard”