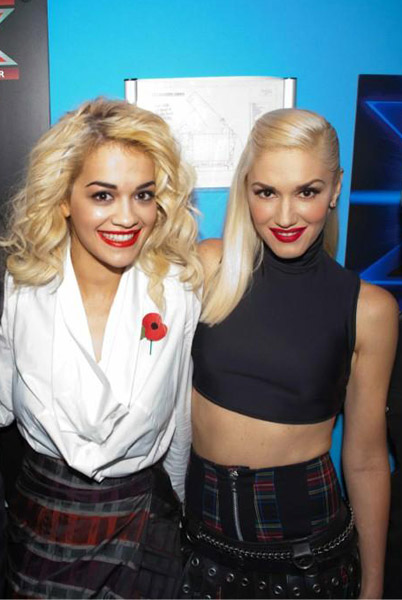 According to media such as MTV UK,the UK newspaper The Sun is reporting that singer Rita Ora,who of course is a huge fan of No Doubt and Gwen, has a collaboration with Gwen lined up for next year. There has been no official confirmation of this,though,and unfortunately The Sun article itself is only available to subscribers of the newspaper,so we are unable to see exactly what it states about the possible collaboration. We hope to find out more about this report soon.

Rita Ora has revealed that she has worked on material with pop legend Prince for her second album.

The 23-year-old British star also told The Sun that she has drafted in her hugely successful pop-dance music producer BF Calvin Harris to work on her new LP.

And she’s also got a collaboration with Gwen Stefani lined-up for the new year, the paper reports.

Talking about the purple pop wizard, Rita said: “I have met him and I have had the honour of being in the same studio as him. We messed around with some music and you know, I can’t believe he can play so many instruments.

“All I can say is that we’ve definitely done some music together.”

Despite previously saying they wouldn’t mix business and pleasure, Scotsman Calvin is reported to have produced “a few” tracks for Rita’s album.

She said: “I love pop music and I’m a pop singer, so it’s just pop music with a lot more honesty in it.

“There are a lot of revealing lyrics in there.”