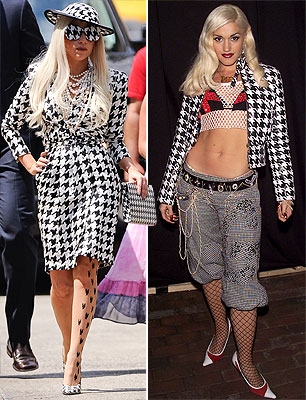 What do you guys think-is Lady Gaga being inspired by Gwen? Rolling Stone thinks so….

Comparisons between Lady Gaga and Madonna play out exhaustively in magazines and tabloids; SNL skits parody it; tearful online fan wars are fought over it. Everything from (unintentional?) sister choruses to the singers’ synchronized tastes in titillating lingerie have been up for dramatic media debate. But lately, a relevant new parallel has emerged between Gaga and another kooky blonde omnibranded popstar: Gwen Stefani. Among the compelling visual evidence: Gaga’s recent bravely blue hair escapades (a look Stefani test drove way back in 1998); her alternate Veronica Lake look (again, a look the No Doubt singer defaults to now and again), and an affinity for black and white ensembles and corresponding eye makeup. Gaga even announced a spoof children’s clothing line — just as Stefani announced the Target launch of her own (very real) kid’s line, a mini version of Harajuku Lovers. And as yesterday’s multi-ranging appearance and performance on The View reveals, even Gaga’s taste in heritage prints overlaps with Stefani’s. Case in point: these ladies love their houndstooth.

In signature ambitious form, Gaga didn’t merely accessorize in houndstooth, she essentially wallpapered herself in it — even opting for Bootsy Collins style houndstooth shades and a matching clutch and hat while she plonked out a spirited rendition of “You & I” on a (wait for it) houndstooth piano that Elton John surely will covet. And she sported houndtooth eye makeup, which more or less had a harlequin effect (turf Stefani also has explored, naturally). But Gaga remembered to balance eccentricity with some pearls — perhaps an incidental nod to not only to Gwen, but to Vivienne Westwood, the grand dame of haute punk fashion and symbolic progenitor to both avant-loving singers. The overall result carried Gaga-specific dual distinction of being disorienting AND a bit demure — for someone who’s worn meat and Kermit the Frog, anyway.

As anyone who watched MTV or opened a style publication ten years ago may recall, Stefani branded houndstooth into a recurring motif in her Rock Steady era wardrobe — the same pop art heavy era she helped make Stephen Sprouse grafitti prints a universally recognized visual. 2001’s hit video for No Doubt’s comeback dancehall anthem “Hey Baby” memorably featured houndstooth everything, leading the band to even integrate the check pattern into their subsequent live sets.

Perhaps Gaga has No Doubt’s impending reunion album on her mind? What’s next: a troupe of thematically dressed acolytes to rival Stefani’s own Harajuku Girls? If so, a few people at the mysterious Haus of Gaga are going to feel left out.