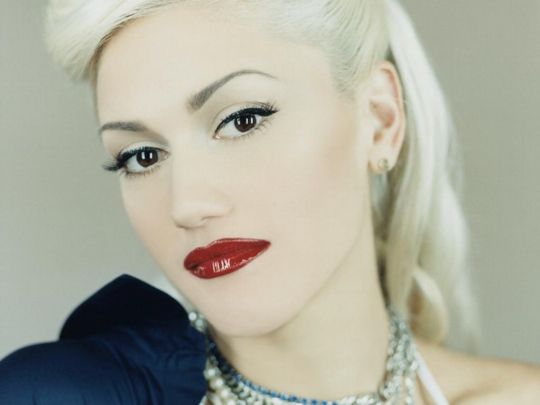 Check out an awesome essay about Gwen that was written by huge fan Laia,a contributor to RookieMag.com,the teen website run by fashion blogger Tavi Gevinson(who of course is also a big fan and interviewed Gwen for Teen Vogue last year.) We love everything Laia says about her devotion to Gwen-I think all of us feel the exact same way!!

I don’t really remember the exact moment that I fell in love with her. All I have is a memory of singing loudly to No Doubt’s “Just a Girl,” or maybe it was “Spiderwebs” in the car with my mom while she was driving me to school. The song would always come on when I was about to get out, and I always made her pull over so we could finish singing along before I had to start my school day. It was probably weeks before I even knew who the girl behind the voice was.

We had just gotten cable, but I was only interested in watching Nickelodeon and the Cartoon Network. Nickelodeon was channel 43 and the Cartoon Network was 49. It happened that MTV was right between those two—channel 46—and one day while flipping from one of my favorites to the other I heard the unmistakable strains of “Spiderwebs” coming from the television, and I paused. The sight of this blonde girl with rhinestones on her face, defiantly humping the fish-eye lens, changed my world immediately. She was everything I wanted to be and didn’t know until this very moment. She would become a guiding light in my teenage years.

My obsession with Gwen—and the rest of the band—grew like a fire. I went from zero to bindi in a matter of days. I started drawing dots in the middle of my forehead with bright eyeliner—topped with a glob of glitter gel, of course—but then stores, influenced by Gwen, started selling sticky gems, and those were a lot easier to deal with. This was a standard part of my makeup routine, worn to school dances and co-ed hangouts alike. I wore wide-leg pants and tank tops almost exclusively. I bought every single magazine with a picture or a mention of Gwen and/or No Doubt. I finally got Tragic Kingdom from my Secret Santa that Christmas. I listened to the record nonstop and remember playing it at my friend’s house and dancing and singing along in front of the mirror. It was everything I ever wanted and everything I ever needed and just, you know, everything.

What was it about Gwen that hooked me? Yeah, she had killer style, but she also just seemed totally normal. I loved Courtney Love and Shirley Manson those days too, but they had certain superhuman qualities. They were tough, not to be messed with, intense. Gwen was almost a normal human in supernatural circumstances. She was relatable. She joined a band her older brother had started, she made her own clothes, she sang about how much it sucks to be a girl when everyone’s an idiot, compared her relationship to her Ken and Barbie dolls, and sang an epic song about being 16 with a killer guitar solo that, whenever I listened to it with my mom, she would rewind so we could listen to it again. The adult heartbreaks that Gwen sang about seemed similar to my teenage ones—or at least they did till I got old enough to detect the complications and layers in her lyrics. I was glad to have someone who was going through similar experiences—I thought they were similar, anyways—and was able to come through to the other side totally awesome and ass-kicking.

My love and devotion for Gwen continued on throughout the years, through progressively dancier records with songs about marriage and kids that somehow still made sense in my husbandless and childless life. I was still devoted when Gwen released her first solo record, which I listened to on repeat for two days straight during the overnighters I pulled to complete my final projects for design glass in the fall of 2004, even though by then I was trying to be too cool for school with my indie-noise music or whatever. And yes, I even went and bought her second solo album, The Sweet Escape, and I listened to it once and I hated every second of it, so I quickly put it away so as to not damage the perfect image I had of her.

At this point I’ve probably loved Gwen Stefani for longer than I’ve been alive. Her songs guided me through the worst times of my teenagehood (and let’s face it, probably adulthood, I mean I feel like it’s only now that I really GET “Simple Kind of Life” and it’s kind of too amazing for words and it makes me want to cry a bit?); her style has protected me from cringing when I look at pictures of young me, because whatever, Doc Martens and visible bra straps will always be cool; and her fun-loving, secretly bad-ass attitude was exactly what I needed to get through life.

Last month I went home to Puerto Rico to see my family. My mom still had to drive me around everywhere, because I never got my license—that’s another story—but I didn’t even care, because all we did was listen to No Doubt and sing along with Gwen at the top of our lungs. For those few moments it was like nothing had changed. Everything was perfect, and I was truly happy.

4 thoughts on “Fan Essay on Gwen at RookieMag.com”