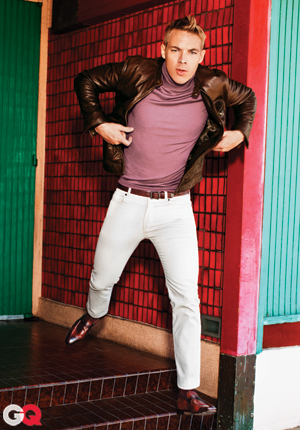 Last week we posted how Diplo talked to Australian media about Major Lazer’s collaboration with No Doubt for the new album ,and now he again mentions working with them in a new interview in the October issue of GQ Magazine. He says that he enjoys collaborating with artists like No Doubt,and that he ”got lucky” when he got the chance to work with the band. He goes on to say he didn’t tell the band what to do in the studio,but rather let the record speak for itself and help No Doubt make the best record possible. He also said that he was surprised that No Doubt reached out to Major Lazer,since most people don’t seem to know much about the production team,but that Gwen apparantly knew about him from having toured on the Harajuku Lovers tour with M.I.A.(whom Diplo has also worked with.)

GQ: How do you find the time to make music?
Diplo: Today I was trying to sleep, it was a tiny jet that took us from San Francisco to Kansas, but I usually work on the planes. I get rough ideas. With a good Bloody Mary I can watch whatever Miley Cyrus movie is on the plane, work a little, and get inspired that way. I’m home a lot. I spend most time rushing out ideas, like when you put an idea together, it’s the tip of the iceberg, the rest of the iceberg is mixing it and delivering it, you know? There are so many iceberg tips, for every ten thousand tips, I have a hundred icebergs. Big, giant icebergs, you know? You gotta weed out what works, what goes which way, and just kinda wrap it up.
GQ: Will you pass them onto somebody?
Diplo: Recently, I’ve been doing more and more of that, with this guy Derek who programs my computer for me, fixing stuff for me, being there for like five years, he’s my right-hand man and I work with him in the studio doing chord progressions. I do a lot of collaborations and productions, whether it’s Switch or Steve Aoki or No ID or Will Smith or No Doubt—I always like to collaborate and be a quality control person for the people ’cause I have my own taste in music and bring that to other peoples’ brands and help them learn a little bit. I do that a lot these days.

GQ: Is it hard to not be too selfish in that situation? And has it been hard to manage some of those bigger personalities?
Diplo: I don’t say no to anybody, really, I’m pretty eclectic. If you’re gonna look for me, you gotta know what you’re getting into. I’m not a commercial machine, I do a certain type of thing. I usually want to collaborate. No Doubt, I just got lucky, I wanted to do something for them, I’m not telling them what to do, their record speaks for itself, we’re just trying to make it the best record.

GQ: Are you surprised when folks like Beyoncé or No Doubt reach out to you?
Diplo: I was surprised with No Doubt, and Gwen Stefani knew a lot about my personal life because she had M.I.A. on tour with them four, five years ago, and they used to talk about their relationships and stuff. That was definitely pretty weird, that someone like her, knew anything about me. Most of the time people don’t know who I am or what I do or what Major Lazer is. It’s just a bunch of names or idioms for a lot of people because they’re so caught up in their own things.