Here’s some sweet-and much-deserved-praise of Gwen’s always-awesome style from BurdaStyle: 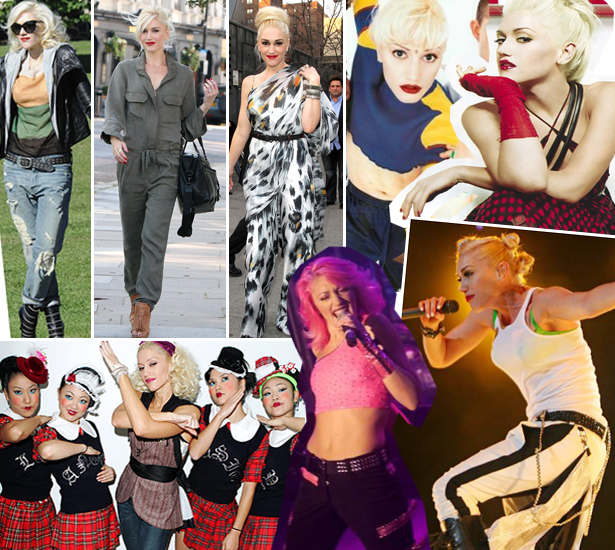 When I was younger I dreamed about being a rock star. To me it seemed as if they lived entirely by their own set of rules; they could get away with anything – fashionably speaking and otherwise. I loved and was inspired by women like Debbie Harry, Patti Smith, Shirley Manson and Kim Gordon, who were each beautiful in their own way – they didn’t need to rely on the stereotypes of over-sexed, under-dressed airheads in order to be considered attractive or desirable. I also loved how each of these women cultivated their own personal style.

Rock stars have such strong stage presence and personality that it only makes sense that they would manifest that into strong personal style choices and while they may not always end up on the “best dressed” list, rock stars are certainly more interesting to watch on the red carpet than the all-too-safe, stylized starlets.

While I have a long list of female (and male) musicians throughout history whose style I admire, I decided to focus on 4 ladies who are currently causing a sartorial stir and cultivating (or in the case of Gwen Stefani continuing to cultivate) a style all their own. While there are loads of musicians, both hugely famous and on the fringes of fame, who have fantastic individual style, I decided to profile these 4 as I think they have unique and identifiable looks that define them not only as musicians but as individuals with killer personal style.

Gwen Stefani:
Gwen was one of my original rock star style idols and while she’s a veteran of the music biz, rumors of a new No Doubt album coupled with her continued success with her clothing line L.A.M.B. solidify her as just as much a trend setter today as she was back in the 90s when she was rocking oversized Adidas pants and crop tops. She’s a great mix of glamour and tomboy chic with her platinum blonde hair, blood-red lips and baggy trousers. Her style evolution has been a colorful journey, from bubblegum pink locks and braces to over-the-top Harajuku chic, but no matter what incarnation she takes on she is still that tomboy from Southern California who can keep up with the boys without smudging her lipstick.