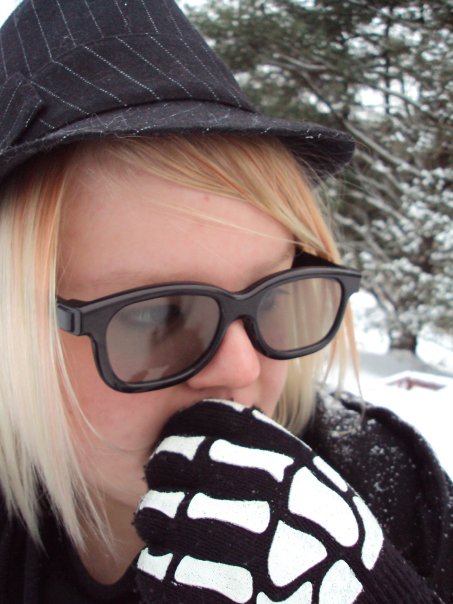 This month’s featured fan is Chelsa Bowman! Here’s our mini interview with her. Enjoy your read! 🙂

Tell us a little bit about yourself.
My name is Chelsa Bowman, a long time nearly life time No Doubt fan. I’ve grown up listening to them and have been known to recruit people into being fans. I recruited one of the greatest guys to be a fan, my boyfriend of five years. But sadly on January 9th of 2009, he was killed in a car accident. Now, he’s dancing to “Settle Down” in Heaven. (:
How did you become a fan?
As soon as “Don’t Speak” hit, I was maybe five or six, and it was the first song I remembered by heart…along with the rest of Tragic Kingdom…and eventually…it added on. I love No Doubt
Do you have a Favorite No Doubt Memory?
After all of those years, numerous people telling me No Doubt was gone for good, I got to rub it in their face when No Doubt announced that they were releasing Push and Shove in September!
What about your Favorite Era?
Probably Return of Saturn, Gwen was emotionally wound in that era and the lyrics to their songs cut so deep.
If you had to choose Your Favorite No Doubt Song, what would it be?
Oh mercy, this is the hardest question I’ve ever answered, but if I had to choose, it would be “Magic’s In The Makeup.”
What is your most prized No Doubt possession?
My autographed picture of Gwen Stefani, which I have hid in it’s own little place to where no one but me can touch it. 😉
What is one thing that you want to achieve during this new No Doubt Era, a No Doubt Dream if you will?
A dream to go to my first (I know, they never come near my state) Even that, or have Gwen, Tony or Adrian tweet me (Tom already has, so part of my dream is fulfilled.)
Two more questions. If there was something that you wanted No Doubt to do during this tour, what would that be?
COME TO KENTUCKY!!!! And I would love for them to play some Self-Titled on tour too. Can’t forget about their roots!
Last question. Is there anything you would like to say to the band, you know if they happen to read this?
Oh, wow…I don’t know where to start. To No Doubt, if you ever read this..Thank you so much for the amazing records you put out, for all the heartfelt lyrics and for all the songs I can relate myself to, thank you. You guys don’t know how much your music means to me. Meant so much to me, during my school years I saved up lunch money to purchase your albums just to have them all…and now all I can say is that I got a job, and I’ll end up blowing a whole paycheck on you guys. Thank you thank you thank you for everything. You guys are great, and I feel Push and Shove will only make you greater..<3 Much love from Kentucky,
Long time Fan,
Chelsa Bowman