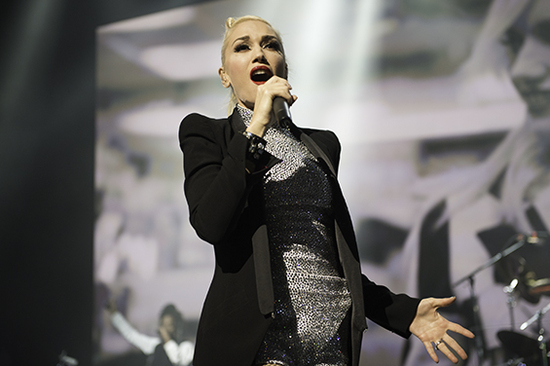 OC Weekly has posted a rave review of last night’s Gibson show-we hope the band and everyone who attended the sold-out,seven-night residency had an amazing time!!

One of my early concert claims to fame is seeing No Doubt in a warehouse in Orange back in 1994. Fast forward eighteen years and No Doubt is capping a seven night sold-out run at the Gibson Amphitheatre with roughly 40,000 people snapping up tickets.

Their historic run has been spurred by the release of their new album Push and Shove. A buzz filled the Gibson Amphitheatre as soon as the lights dropped. Various video clips flickered on a huge LCD screen as the all the members of No Doubt lined up in front of the stage as a barrage of camera flashes attempted to light up the darkened venue.

“Push And Shove” immediately had No Doubt charging out of the gates guns blazing. Stephen Bradley ambushed the front of the stage for his vocal parts while playfully interacting with Gwen Stefani. It was astonishing that Stefani never sounded winded while singing even though she was never in one spot for more then two seconds.

The crowd really cut loose during “Hella Good” as its enormous bass line was enhanced by the whole audience jumping up and down at the direction of Stefani. Even in the early days, No Doubt have always been appreciative of their fans and things haven’t changed as Stefani truly seemed astonished to have sold out seven nights and thanked the crowd multiple times throughout the evening.

It was a parade of greatest hits as the tropical vibe of “Underneath It All” smoothly transitioned seamlessly into the fast paced “Ex-Girlfriend.” The ground rumbled again as Tony Kanal manned his Moog keyboard for the sub sonic bass of “Hey Baby.” Every member of No Doubt is vital to their overall sound and Adrian Young’s snappy snare drumming on “New” was vicious.

A spacey outro to “New” gave time for the roadies to assemble some acoustic instruments as No Doubt had a chance to catch their breath. Stefani took this time to make some No Doubt fans extremely happy as she pulled them from the crowd for a photo. The smiles permanently attached to the fans face spoke volumes.

No Doubt dipped into their back catalog for “Hey You” as Tom Dumont gracefully strummed out the acoustic shimmery parts. “Simple Kind Of Life” was one of the many spine tingling moments of the evening as the crowd sang along at top volume. The acoustic set seemed to have gone by in seconds as No Doubt soon kicked things into a higher gear with the bouncy “Sunday Morning”.

“Settle Down” kept the audience rocking as Dumont deftly handled the ska flavored guitar parts. Lighters and cell phones lit up the Gibson Amphitheatre for “Don’t Speak” as Stefani’s voice perfectly hovered slightly above the mix of the instruments. After a weak attempt by the men to sing “Just A Girl”, the ladies in the audience almost blew out my eardrums singing/screaming the lyrics at Stefani’s direction.

Another special moment occurred when No Doubt teased the crowd with a good portion of “Excuse Me Mr.” during the fan request portion of the evening. My personal favorite moment though came during the punk/ska classic old school song “Total Hate” which brought back a wave of flashbacks to that warehouse show in Orange.

“Spiderwebs” brought down the house and sadly drew to a close the historic seven night run at Gibson Amphitheatre. It is safe to assume No Doubt will tour the world on the new album and I’m willing to bet they will come back to Orange County for a multiple night run just as historic.

Critical Bias: Tom Dumont gave me his guitar pick after I saw them in Modesto right before Tragic Kingdom went bonkers. It was a Fender pick that was red, white and blue.

Crowd: Arguably one of the most diverse audiences you will ever see at a show.

Overheard in the crowd: A collective “Whoa” when Gwen Stefani came back in a red outfit for the encore that showed off her six-pack abs.

Random Notebook Dump: The line for the ladies bathroom was out of control.