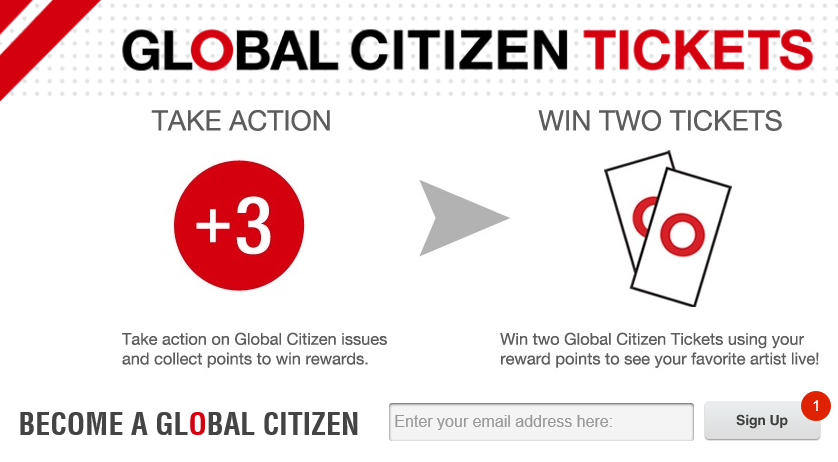 This is really cool: According to Billboard,the always-charitable No Doubt is one of the dozens of musical acts participating in the Global Citizen Tickets Initiative, a new program launched by the Global Poverty Project (GPP) today which is designed to incentive social activism with concert tickets. Fans can register at Globalcitizen.org/tickets today,where they can take a variety of social actions,ranging from signing petitions to calling their representatives,to earn points they can use to win free tickets to concerts (with a minimum of two tickets per show to be offered). The effort will engage thousands to take action and shine a spotlight on issues related to extreme poverty,including polio,malaria,women’s empowerment,education, and more. While No Doubt is not currently touring,we can follow @GLBLCTZN on Twitter for the latest updates on the campaign and trust that the band will share more details on their involvement in the initiative. We applaud No Doubt for continuing their inspirational tradition of charitableness by taking part in this awesome campaign.

Some of the most powerful touring artists in the world — including Pearl Jam, Beyoncé, Bruce Springsteen, Kanye West, Jay-Z and many more — will unite behind the Global Poverty Project (GPP) through the Global Citizen Tickets Initiative, a new program launched today which is designed to incentive social activism with concert tickets.

Music fans can register at Globalcitizen.org/tickets today, where they can take a variety of social actions, ranging from signing petitions to calling their representatives, to earn points they can use to win free tickets to concerts (with a minimum of two tickets per show to be offered). The effort will engage thousands to take action and shine a spotlight on issues related to extreme poverty, including polio, malaria, women’s empowerment, education, and more. Global Citizen is an innovative online platform and mobile application, and its simplicity makes such a broad program feasible.

“We are thrilled to be part of the Global Citizen campaign — a brilliant way to reward fantastic volunteers fighting against global poverty,” One Direction said in a statement to Billboard. “We can’t wait to see some ‘global citizens’ at our shows!”

The Global Citizen Tickets Initiative was the brainchild of Pearl Jam Manager, Kelly Curtis, who had long considered a socially relevant ticket/reward scenario, and the Global Poverty Project CEO Hugh Evans, whose Global Citizen Festival in New York’s Central Park last year showcased a platform that works. That show, with Neil Young with Crazy Horse, Foo Fighters, the Black Keys, Band of Horses and K’Naan, saw 60,000 people earn tickets by participating in specific activism using the same digital platform and technology that will be employed for this new initiative.

“When we went into this thing, we always knew it was bigger than Pearl Jam, it couldn’t be just another thing Pearl Jam was promoting, it had to be Jay-Z and Bruce Springsteen and Dixie Chicks, it had to be everybody starting this thing off,” Curtis tells Billboard. “We had to get all the mechanics right, there were a lot of moving parts. But, philosophically, the ask was really easy. Most people said ‘yes’ right away, and some didn’t say ‘yes,’ but I’m sure we’ll get them on the second round, once we do this first wave of who’s on board. And after that, there’s no stopping it.”

In a statement, Pearl Jam guitarist Stone Gossard praises Curtis for “spearheading this thoughtful strategy. It reflects the DNA of our band and business, and expands it to respond to some of the greatest inequities and challenges facing humanity.”

Evans says the Global Citizen Festival in Central Park demonstrated that citizens will respond to the incentive of music tickets to take action in support of the world’s poor. “We saw close to 700,000 actions taken in just one month before the Global Citizen Festival, with over 3 million unique viewers in that month leading up to it,” he says. “I think what we demonstrated is that the site is immensely powerful, the platform works, the technology works, and that, in partnership with the music industry, can be an enormous incentive for activists to really do the things they care about, which is taking actions in support of the world’s most vulnerable people.”

The Global Poverty Project’s nonprofit partners include ONE, Malaria No More, Living on One, and The ISIS Foundation, among several others. The actions taken through the Global Citizen Ticket Initiative will positively impact such global challenges polio and malaria, women’s empowerment, food security, access to education, and more.

Chairwoman of the Global Citizen Tickets Initiative Michele Anthony, an industry consultant for artists like Pearl Jam, says the universal appeal and non-partisan nature of these poverty related issues make buy-in uncomplicated for artists and fans alike. “Extreme poverty is the through-line to the world’s greatest challenges,” she says. “Whether it’s access to education, food security, infant mortality, disease, it’s really extreme poverty that is the heart of all of that. It’s incredible to think that such an easy ask as giving two tickets can make a dent in that once you reach critical mass, because kids are taking action in specific ways.”

Those participating in these social actions will be rewarded with points, which can then be used to win free concert tickets from the Global Citizen Tickets Initiative “pool” which have been donated by participating artists. Typically, artists donate two tickets to each one of their shows during their tour cycles. Spread out over dozens of artists and hundreds of shows, in the aggregate the impact on the social activism front will be substantial.