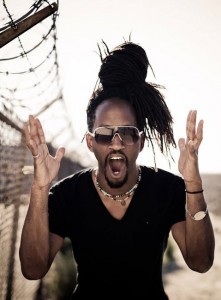 Name: Stephen Bradley
Birthday: August 23, 1972
Birth Place: Richmond, CA
Influences: The Police, Bjork, Bad Brains, Radiohead
His band: Chocolate O’Brien and Valley of the Kings
How he started playing the trumpet: He grew up wanting to play the drums, but his school band already had three drummers, so he decided to play the trumpet because “I knew it only had three valves so I figured it (the trumpet) was simplistic enough and would be easy to pick up…it’s one of the hardest instruments to play.”
Info When Phil Jordan left No Doubt in 1995, Stephen took over.
Other Bands he’s been a part of: Green Day, Dizzybam, The Good Life, Baby Snufkin and helped out Bonnie Raitt