UPDATE: Thanks so much to Alex from the ND Foru for sharing scans of the article! 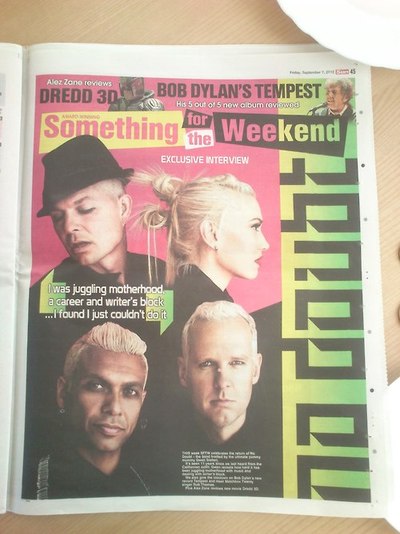 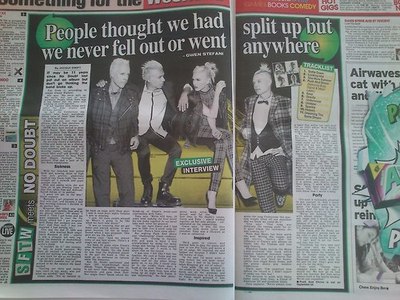 IT may be 11 years since No Doubt last put out an album but don’t go thinking the band broke up.

Far from it, according to singer Gwen Stefani.

She says: “We never split up. We never fell out or went anywhere. People think there was a big hiatus but we were still working on stuff together.
“If not together then seeing each other for kids’ events and birthday parties.”

In fact, the Californian ska rockers, who boast worldwide album sales of more than 45million, have been busy.

Gwen has put out two solo albums and all four members of the band have become parents.

On arriving there’s a kerfuffle of clothes and make-up as a photographer sets up in one room and band members walk in and out of dressing rooms, saying “Hi” to record label staff and proudly get waiting journalists to hear Push And Shove through Tony’s personal iPod and a pair of Dr Dre Beats headphones.

With her bleached hair pulled back and wearing shoes so high they defy gravity, glamorous mum-of-two Gwen looks like she’s straight off a catwalk and years younger than 42.

Slim and oozing style, she and Tony sit in one dressing room to chat first, while Tom and Mohican-haired Adrian sit in another.

“I guess life got in the way,” Gwen explains.

“Basically, I got pregnant on my first solo tour, and because I had bad morning sickness I decided to do another tour.

“Kingston (her eldest son, now six) was eight months then and so we played another 106 shows. I loved it. Then I got home and we were supposed to start the No Doubt record but I got pregnant with Zuma (her youngest son, now four). And then, well, I was just depleted. I had nothing left.”

This was the end of 2008 and Gwen — who married Bush singer Gavin Rossdale in 2002 — admits it was a struggle, not only juggling the demands of motherhood, with her career but dealing with writer’s block.

“I couldn’t do it,” she stresses. “It was so much pressure. We were all excited to start a new record but nothing was happening. It was hard for me so we decided to go on tour and get inspired.”

No Doubt’s summer tour of 2009 proved to be the catalyst the band needed.

“Getting out there and seeing fans react to our music was just what we needed,” says Tony.

Gwen adds: “It’s so natural to be back on stage with these guys. I was in tears most nights because it was so amazing.

“I said, ‘All those people showed up. What’s it going to be like when we have new music?’

“It was so inspiring that we got home and started writing. It was great because I’d felt so homebound when I was pregnant. This gave me my life back.”
Adrian says: “And we played some of our best shows. There’s a magic we all share.”

It’s been 26 years since Gwen’s older brother Eric invited her to sing in No Doubt, the ska band he was then the keyboard player in. He quit the band in 1994 to work as an animator on cartoon show The Simpsons.

But No Doubt continued and their 1995 breakthrough third album, Tragic Kingdom, went on to sell more than 16million copies worldwide and gave them their No1 single Don’t Speak (about the break-up of Gwen’s seven-year relationship with Tony).

Not quite a comeback … new album Push And Shove

Tony says: “We’re still here, 26 years later making the best music we can make together so we never take each other for granted.

“The last fight Gwen and I had was in 2009 over a cover song for the tour. There’s been none since.”

But making Push And Shove was “challenging” Gwen confesses.

She says: “Trying to balance kids and work is hard. I feel overwhelmed by doing too many things and having so many people counting on me. I write a lot about that on the record.

“I was torn. I felt like I had two families. My own at home and one at the studio. As a mother of two babies and all the other things going on in my life, I could only go to the studio three days a week at the most. That’s not a lot.

“So I’d be there from 4pm after being up all night with Zuma. It was exhausting.” So new procedures were introduced, and for the first time in No Doubt’s career, Gwen and Tony — who’d worked together on her solo albums — collaborated on the songwriting.

Gwen says: “It was the first time we both wrote lyrics and melodies. Tony was a lifesaver as I was so exhausted.
Inspired

“He’d gone to classes and learned how to play the piano and how to use Pro Tools and wrote a lot of songs. He inspired me and helped me because I didn’t have the luxury of time.

“In the past I’d never write a song before the sun went down. This time I had to be home for when Kingston got out of school.”

Tony adds: “So we worked in the studio at my house. We had to black out all the windows and this beautiful view of Los Angeles so Gwen could pretend it was night. But it worked. Once we wrote the song Undercover this massive weight lifted off our shoulders and we knew we could do it.”

Tom says: “That song was definitely the turning point for us. It gave Gwen the confidence she was looking for.”

Push And Shove has been worth the wait. Mixing ska, reggae, pop and electro, there’s also the influence of Gwen’s solo albums on tracks like the Undone and love song Gravity.

Gwen says: “I’m surprised how upbeat the record is. I didn’t expect to make one like that.”

The decision to work with Major Lazer came from Tony, a friend of American DJ and producer Diplo.

Tony explains: “We’ve always been a band that writes our own stuff but on (2001 album) Rock Steady we opened up to collaborations with people we like.
“We worked with people like Ric Ocasek from The Cars, Nellee Hooper, Prince and The Neptunes. So once we had some songs under our belt Major Lazer called and we sent the idea we had for Push And Shove and they said ‘This is really cool.’ So we started writing choruses, and that’s how it happened.”
Gwen admits that, although she enjoyed making her two solo albums — Love. Angel. Music. Baby. in 2004 and The Sweet Escape in 2006 — it’s being back with the boys that she prefers.

She says: “It was fun to experiment and work with outside writers but it was intimidating. Walking into a session with somebody you think is a genius, and they’re sitting there going, ‘I work with everyone — what have you got?’ And you’re, like, ‘Not much. I don’t even know how I wrote a song.’
Party

“It’s such a vulnerable situation to put yourself in. And I never need to do that or want to do it again. I’m happy being in No Doubt. And it’s nice to have a record where there’s no fat on it.

“We’ve not pumped this up with album tracks. There’s not any songs that I would want to edit off. It has a really good balance of song types. I love it. I’ve listened to it a billion times. It’s always on repeat.”

Now Gwen and No Doubt are looking ahead to getting back on the road to play the new songs — with their young families in tow.
“I can’t wait to get out there and play this live.

“Everybody has their own tour bus now and we have a travelling caravan. So when we get to the venue the nannies set up the romper room, which is the room that used to be our backstage party room, with the DJ and the bar. That’s gone now and it’s for the kids.”

Tony adds: “Things have changed since we last put a record out. We now go on tour with our families. But then we’ve always been a big family anyway. We’ve just expanded.”

Push And Shove is out on September 24.