Thanks so much to Friskyy for sharing his scan of another glowing review of ”Settle Down” that appears in the latest issue of Rolling Stone. We transcribed it below. 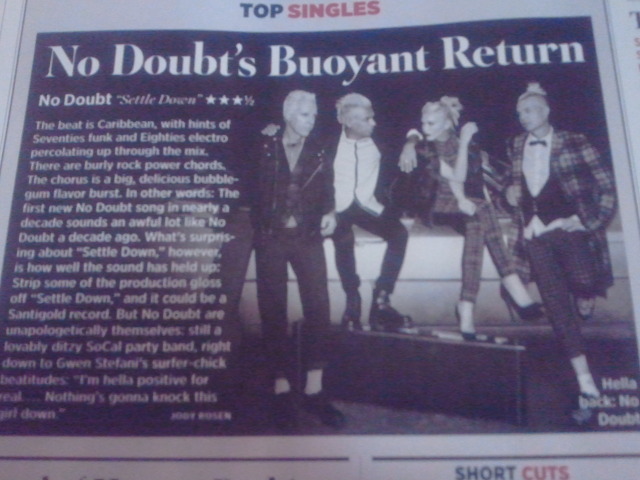 The beat is Caribbean,with hints of Seventies funk and Eighties electro percolating up through the mix. There are burly rock power chords. The chorus is a big,delicious,bubble-gum flavor burst. In other words: the first new No Doubt song in almost a decade sounds an awful lot like No Doubt a decade ago. What’s surprising about ”Settle Down”,however,is how well the sound has held up: Strip some of the production gloss off ”Settle Down”,and it could be a Santigold record. But No Doubt are unapologetically themselves: still a lovably ditzy SoCal party band,right down to Gwen Stefani’s surfer-chick beatitudes: ”I’m hella positive for real…nothing’s gonna knock this girl down”.