Spinner has included Gwen’s famous bindi on its list of Rock Stars’ Most Iconic Accessories. We love how she was rocking the bindi again in recent TwitPics from the studio!

It’s not enough to wear the right outfit. Any chump with a few (thousand) bucks can check out Fashion Week — ongoing this week in New York City — and buy the latest designer look. The key is to accessorize, a skill that’s nearly as important for rock stars as musical ability. As Fashion Week sashays toward its finale, we salute some of the most memorable accessories in music history. They range from simple and elegant to downright outlandish, but they share one thing in common: We can’t imagine our favorite artists without them. 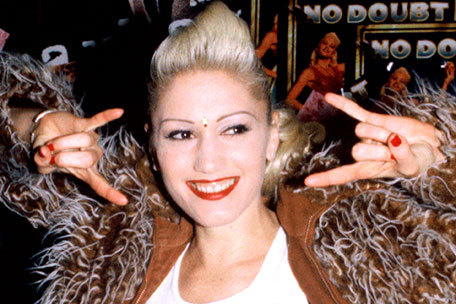 As per Hindu beliefs, the area between the eyes is the “sixth chakra,” or “anjra,” a point where powerful kundalini energy escapes the body. The bindi keeps it all inside, and circa ‘1995’s Tragic Kingdom,’ Stefani’s dot may have given No Doubt the boost they needed to outlast their ska-punk peers and become one of the era’s biggest rock bands. Why didn’t Goldfinger think of that?