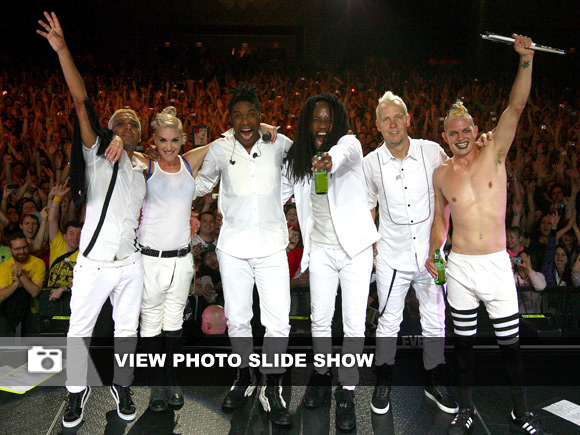 Thanks to our good friend Tazy Phyllipz from the Ska Parade for sending us the link, Orangecounty.com posted about No Doubt’s 25th birthday and added an amazinh photo slide show with pics from all different eras! Check them out here! We love them!

On March 14, 1987 the Anaheim-based ska-rock band No Doubt performed its first official live show at Fender’s Ballroom in Long Beach as one of a dozen or so acts opening up for the Untouchables. The group, which was formed in 1986 by keys player Eric Stefani, lead vocalist John Spence and included a baby-faced Gwen Stefanion back-up vocals, had played multiple house parties, but this occasion was truly the birth of No Doubt.

In December of that same year, Spence committed suicide in an Anaheim park and the group disbanded. By that spring, however, it got back together with Alan Meade (currently of local ska act Starpool) as lead vocalist. Meade left the group shortly after and Gwen stepped into the spotlight. Members came and went, including Gwen’s big brother Eric, who went on to pursue a career as an animator for “The Simpsons.” In the end it was Stefani, her former flame and bassist Tony Kanal, guitarist Tom Dumont, drummer Adrian Young as well as the band’s horn players, trombonist Gabrial McNair and trumpet and keys player Stephen Bradley.

No Doubt signed to Interscope Records in 1990 and released its self-titled debut in 1992. Sales were unimpressive, still the band pressed on and released the Beacon Street Collection in 2005 on its own label, Beacon Street Records. Later that year, on Interscope subsidiary Trauma Records, No Doubt released Tragic Kingdom, which spawned several singles including “Just A Girl” and “Spiderwebs,” and launched the sextet into mainstream commercial success.

Return of Saturn was delivered in 2000 and Rock Steady followed quickly after, released just a year and a half later in December 2001. Extensive tours, TV appearances and awards – including a few Grammys – came next and by late 2003, it seemed like it was time for a break. The following year, Stefani released her first solo album, Love, Angel, Music, Baby, and followed its monster success with The Sweet Escape in 2006.

During time away from the band, its members had almost two fistfuls of offspring between all of them. Stefani, who married Bush frontman and longtime boyfriend Gavin Rossdale in 2002, gave birth to two sons during her solo career run, Kingston James McGregor Rossdale in 2006 and Zuma Nesta Rock Rossdale in 2008. She was also busy with her fashion and fragrance lines. The guys also expanded their families as well as worked on other music endeavors. Dumont produced Huntington Beach-based artist Matt Costa‘s full-length debut Songs We Sing. Young toured with Bow Wow Wow in 2004 and sat in on several recording studio sessions for various bands including Unwritten Law and the Start. Kanal worked with pop star Pink in 2008 on her album Funhouse.

In 2009, No Doubt embarked on a massive summer tour which included numerous dates at Gibson Amphitheatre in Los Angeles as well as near its hometown at Verizon Wireless Amphitheater in Irvine. For a while things were quiet, but soon No Doubt began posting pics on social networking sites from a Santa Monica recording studio and tweeting about pushing forward with a new release. Originally it was due out by fall 2011, but according to various tweets by the band, not wanting to rush the album (which it’s working on with producer Mark Stent), band members decided to hold it until summer 2012.

To celebrate the actual day of its 25th anniversary, Stefani tweeted that she would be spending the day “…making music today with Tony Kanal, Tom Dumont and Adrian Young.”