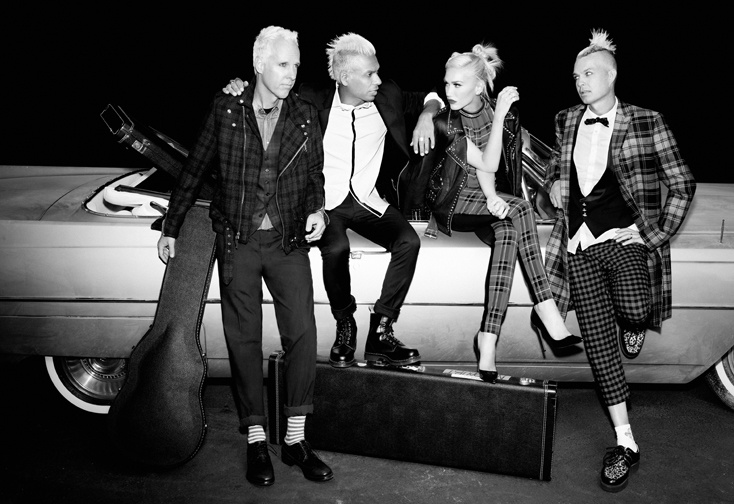 Thanks so much to I♥ND from the No Doubt forum for sharing the link,read this awesome and candid new No Doubt interview with Oyster Magazine!! The site promises to post Part 2 of the interview this week!

Today was a very good day: No Doubt released the video for ‘Settle Down’, the first single off Push and Shove, which will be their first new album in more than a decade (it’s out on September 25 through Universal). Holy shit, right?!

‘Settle Down’ was directed by Sophie Muller, the woman behind many of No Doubt’s memorable videos — think ‘Don’t Speak’ and ‘Underneath It All’ — and it acts as visual proof that No Doubt still kick ass. Having been around since 1986, they might have kids now and be real-life adults or whatever, but Gwen Stefani is still the absolute best (not to mention the fact that she looks exactly the same as she did in 1995) and Tom, Tony and Adrian still make us want to skank in our bedrooms. Note the group hug at 1:32 — oh, you guys!
To celebrate the return of one of our favourite bands, we asked one of our favourite writers The Coquette — the mysterious lady behind the Dear Coquette advice column and brilliant Notes To My Future Husband — to interview them in LA. The interview was so long that we’ve decided to split it into two halves, so stay tuned for Part Two next week. We’ll let her take it away:

This was all a last-minute thing. Oyster magazine sent me an email the day before asking if I knew anyone in Los Angeles who might be interested in interviewing No Doubt. I thought, “What the hell? Why not cut out early from work and shoot the shit with some rock stars?” The next afternoon I found myself sitting down with the band on the rooftop of Siren Studios in Hollywood to talk about their upcoming album, Push and Shove. It had been a long day of press interviews, and by the time I got to them, everyone was a bit slaphappy. It felt like I’d walked into a classroom of high-schoolers waiting for the bell to ring, and when I told them I was from Oyster, I think they were a little disappointed I didn’t have an Australian accent.

Gwen looked drop-dead gorgeous, and Adrian, Tom and Tony, well… they all still looked like boys. They were all filled with a kind of nervous, foot-tapping excitement, and to hear them talk about their music you’d think they were sharing a garage recording with their friends for the very first time. It blew my mind to realise they’d been playing music together since the 80s.

Got it. So you’ve been working on some of these songs since 2008?
Tom: We got the first one at the end of 2009. In 2008, Gwen was pregnant with Zuma, and we tried really hard to write. We thought we were gonna write an album that year, and it just kinda wasn’t coming out. We weren’t coming up with stuff that was great, and so rather than keep trying, we turned around and decided to play. Playing live was always the thing that came most naturally to us, what we were naturally best at, and it really worked, so by the end of 2009, we had written the first song for this album, which was ‘Undercover’, and then, throughout the next year wrote the rest of the album and recorded it in 2011. So I mean, really, most of our albums have taken about that long. Not a ten year gap — as far as the actual writing and recording, it took about two years, which is pretty much on track for us.

Was there a particular song that was more fun for you guys to come up with than the other ones. Were there any standouts?
Tony: Oh, man…
Gwen: There were some. Each song has its own journey, and we had a such a hard time getting started because of my whole situation with having the baby, trying not to burn out, and trying to write again. We finally broke through our first song, ‘Undercover’. That one for me was such a joy, because it was like, “We did it! We wrote a song!” It was the pathway to making an album, and then they just started to happen. There was a point where we had a couple going at one time. [Tony giggles knowingly to himself.] It was such a journey. We were only writing together three days a week, because being a mom, there’s only so much time. I’d roll in at four o’clock and try to make things happen. Sit on a couch and be like, “This is your time to be creative,” knowing that I had to get home and go to sleep because the baby was gonna get up, and I was like, “Aaagh!” You know, it’s impossible the way we did it. It was just really, really, really, really hard, so that’s what made it that much more rewarding, and I think the struggle made the record that much greater, because we really had to fight for it.

That’s what you mentioned yesterday [at the album listening session], you said that you had picked ‘Push and Shove’ as the title track because it was such a struggle to come together. Do you think that it was worth it? Are you happy with the results?
Gwen: I feel like, yeah. We’ve done all these things before. We’ve put records out. We had nine years of underground, really great success in a small pond, and then we had commercial success, and we traveled the world and we had Grammys. We’ve had all these amazing things. We couldn’t even dream it up. We would never even have dreamt it, you know? So we’re repeating ourselves in a sense. For us it’s more about the journey, proving to ourselves that we can write the best songs that we can write before we die. Like, this is what defines who we are as songwriters. We were open to maybe collaborate on the record, and we did the one collaboration — with Diplo.

That track was so good.
Gwen: It was so hard, trying to write a chorus on somebody else’s song that was already started. Somehow it’s easier to start it, but I feel super proud of it.
Tony: It’s so surreal to be sitting here talking about it, because we spent the last almost three years working on this record, either writing or recording, and to be sitting here with an almost finished record is pretty exciting.

How did it feel to be back in the recording studio together again?
Tom: It was good. Thing is, before when Gwen did her solo albums and we took a break, before that we had worked so hard for so many years. You know, we lived together in buses on the road for months on end, and it was really healthy to take a break. And by taking a break when came back together to make this record we were kind of reinvigorated. It was exciting again. Burnout is something that’s never helpful when you’re trying to be creative. We really learned that when we were making this record. In the old days we would work twelve hour days, five days a week. We’d work so hard. On this album it was more like six to eight hour days, three days a week. It was easier to be more creative, you know?
Adrian: And this was the first record we’ve done with children.

All of you have children now?
Adrian: Yeah, there are eight.
Tom: Eight kids.
Adrian: All the other records are with zero.

That’s gotta be a huge difference. You mentioned that touring and performing is what you guys really love to do, so are you gonna do a tour with this album?
Gwen: We’re gonna do promoting this year, because I have my children, so we can’t do the tour yet, but we were thinking maybe next year. We would ultimately love to tour, it just depends on how everything comes together.
Adrian: The goal is to go out next year.

I have to say, one of the most memorable concerts I’ve ever been to was when you opened up for U2 at the Staples Center a couple of days after 9/11. Everyone was still walking around in shock, but you guys brought so much energy that night. It was actually pretty cathartic. I’ll never forget, you were just jumping all over the stage. So much energy. You could tell you guys really loved what you were doing.
Tony: Wow. Yeah. That was an amazing time.
Gwen: Mindblowing. I can’t believe we did that.
Tom: That was such a fun time for us. It was hard, because it was after 9/11, but growing up I was a huge U2 fan. You know, probably of the group I was the biggest U2 fan. It was huge to open for them. It was really fun to get to know those guys. We got to fly on their chartered private jet with them. We would hub into shows, so we would drive from home to Van Nuys at three in the afternoon, fly to Sacramento, do a show, police escort back to the plane, fly home, and be in bed by three in the morning. We did that for, like, fourteen shows, right? [Adrian nods]

Are there still artists like that on your wishlist that you would want to tour with or work with?
Gwen: The idea of pressure and writing with someone that I admire would be too much for me. I don’t feel like I need to do that anymore. I did it, and I learned a lot from it, but I don’t think I have the energy for that right now, and I was real eager to do that when I was doing my solo records, and it was really hard and hurt a lot, and he [she indicates to Tony] did it a lot as well, and I think by us doing that is what helped us write this record together, and make a record that we’re excited about. I do feel a excited about writing still. If I had more time I would do it.

Yeah, I mean, you have your clothing lines, too, that you’re still doing.
Gwen: Yeah, you know. I have three clothing lines. [Everyone laughs]

Three!
Gwen: It’s ridiculous. I got myself in way too deep [more laughter]. I’ve just been trying my best. I started those lines ten years ago, because I didn’t think ten years later I’d still be doing this. I was trying to plan something that I could do creatively. You know, start a line. That just seemed like a really good idea, and it was, except for now I’m doing three of them, and now this album, so I pray that I can just keep it going where I’m super involved still, but I’m not flying out and doing it.

Of course. Are you still doing the trade shows?
Gwen: I haven’t been able to do fashion week for two seasons because school starts in September. I have a girl that’s really involved. She’s always styled the shows anyway, and so she’s in New York. She reports back, and I’m involved, but there’s only so much I can do at one time. The music has been the priority this year. I did Harajuku Mini, but I had worked on that already for three years, so by the time it came out it was rolling. But with L.A.M.B. it’s a lot. Every season is big. I love doing it, but it’s a business. I like that.

2 thoughts on “New No Doubt Interview with Oyster Magazine”