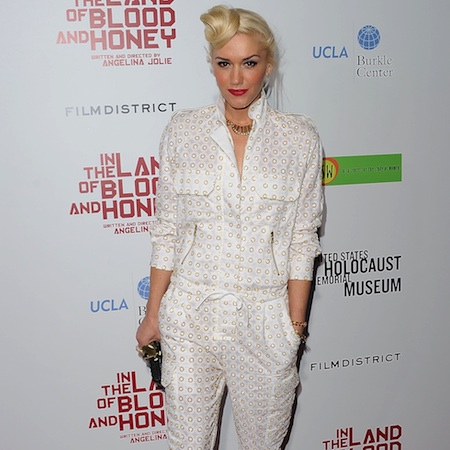 The Belfast Telegraph has posted Gwen quotes from an interview she apparantly gave to German In Touch Magazine. Gwen mentions how she’s only had two serious relationships in her life,and of course married one of the men,but that she doesn’t feel like she’s missed out on anything,although she’s quoted as saying that in her next life she’s going to come back as a man,lol,and that she finds creative people to be ”super sexy”. She also mentions the new album,saying that No Doubt has 10 songs done(Tom shared on Twitter the other day that the band actually now has 12 songs),and that the band has changed since their last album came out,which she explained can be important to their musical process but is also a lot of hard work. The quotes seem rather familiar,but thought we would mention it,anyway-if anyone can get their hands on the German In Touch to see if there are any newer quotes from Gwen and send in the article,that would be great.

Gwen Stefani would love to be a man in her next life.

The American singer has opened up about her romantic life, explaining she has only ever had two boyfriends. She went on to marry Gavin Rossdale, who she has two sons with.

If Gwen is reincarnated after she dies she plans to be very different.

“Until now I had two serious relationships. And one of the men I married!” she laughed, before being asked if she feels as if she’s missed out on anything.

“Absolutely not. A while ago a friend told me she dates two men simultaneously. That really blew me away! But in my next life I’m gonna come back as a man and behave like a b***h.”

Gwen has a firm idea of what she finds appealing in a man. She is only attracted to people who are creative, which she finds “super sexy”.

The star found fame with the band No Doubt, who she is currently recording a new album with. Their last LP Rock Steady was out in 2001 and they want their latest work to be perfect.

“We have already got ten songs and want to do a bit more. Our last album came out 11 years ago, we’ve changed. That’s important to our musical process but at the same time it’s a lot of hard work if you want to come together again,” she told German magazine In Touch.